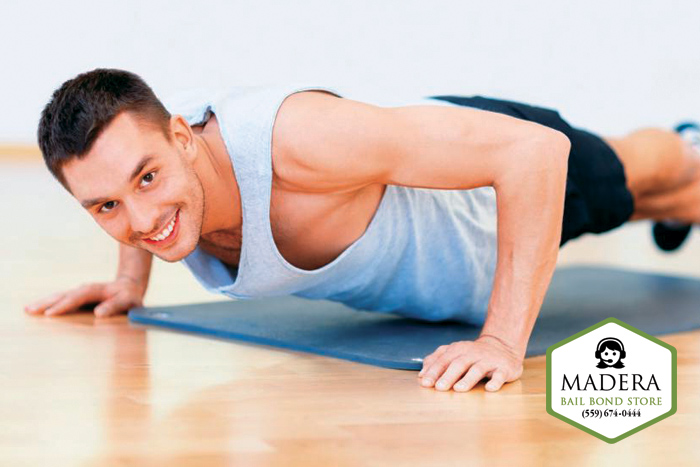 For many people, this is a time when keeping of that pesky extra few pounds becomes difficult. This is, after all, why it is referred to as winter weight.

Part of the problem is that the weather can become too cold for some to exercise outdoor like they’d prefer. These people do not have the money or maybe even the desire, to go to a public gym. They also do not have the capability to create an in home gym. For these people, it can become a real hassle to try to work out and keep those extra pounds at bay.

Luckily, there are a number of great exercises that a person can do with some dumbbells and other regular household objects.

Here are a few examples:

Start in a standing position with your feet a shoulder length apart, and a dumbbell in each hand. Bring the dumbbells to shoulder height. Begin with a basic squat by bending your knees and lowering your waist to the ground while keeping your torso upright. Descend as far as your flexibility will allow, all the while, keeping the dumbbells at your shoulders. Remain squatting for a moment, before rising to a standing position once again. After you are standing again, raise your arms straight above your head, then return them to your shoulders. After that, repeat the process again, starting with the squat.

Start by standing in front of an object of your choosing, such as a couch or chair, that is around knee height and with a dumbbell in each hand. With your back to the object, bring one foot up and let it rest on this object. Begin by lowering yourself to the ground, allowing your arms to hang freely at your side. Be sure to keep your front knee in line with your foot. After you have lowered yourself as far as you can, bring yourself back to a standing position. Repeat the process.

Start in a push-up position, with one hand on the floor, and the other holding a dumbbell. Stay in this position as you raise the dumbbell to the side of your chest. Lower it, then repeat the process for the desired number of reps. After that, switch sides and repeat.

This is just a small sample of what exercises a person can do within their own home, and there are many more out there. Go out and find the best workouts that work for you. Do not let the colder weather prevent you from having the body you want.